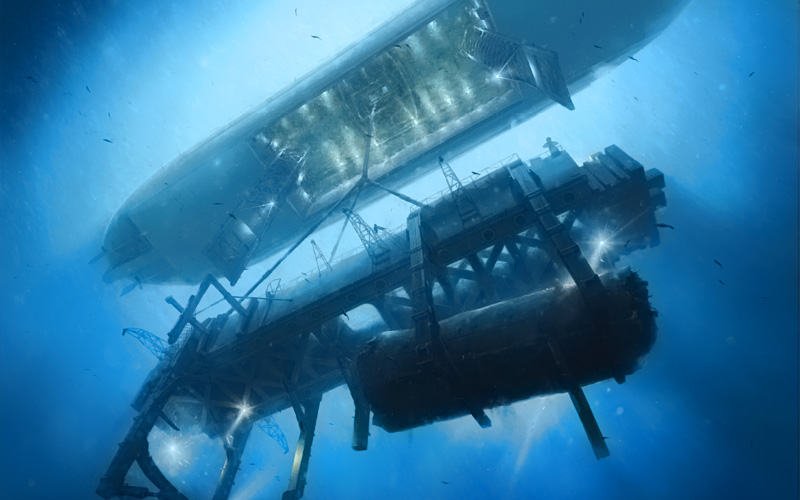 A lost Soviet submarine. A mad, reclusive billionaire. A dangerous covert salvage from the bottom of the sea. A Cold War espionage thriller? No, it’s the true story of a unique recovery ship that’s now getting a new lease on life with oil and gas companies.

The Glomar Explorer is a massive 618-foot-long, 50,000-ton deepwater drilling vessel, which oil and gas companies contract to carry out drilling operations in its Gulf of Mexico Atlantis oil field. However, the ship was originally designed for a far different mission. Built during the 1970s for tycoon Howard Hughes, her space-age claw would pluck precious minerals from the deepest ocean floors.

Or so the world was told.

The story of the Hughes Glomar Explorer actually began back in February 1968, when K-129, a Soviet Golf-class submarine, disappeared mysteriously in the Pacific Ocean some 600 miles northwest of Hawaii. Despite an intensive search, the Soviets couldn’t find a trace of their sub. But thanks to a top-secret naval intelligence system based in Pearl Harbor, the United States Navy knew that K-129 had sunk. And, more importantly, where.

K-129 carried the Soviet’s latest nuclear missiles and torpedoes. She also carried their most advanced navigation system, coding devices and codebooks. If the sub could be salvaged, it would be the intelligence coup of the Cold War.

There was one problem. The sub lay on the bottom in 17,500 feet of water – more than three miles down. And experts said it couldn’t be salvaged.

The CIA ignored the experts and hired Houston-based Global Marine Inc. to raise K-129. Because no submarine could operate at that depth, a special salvage ship had to be built that would incorporate radically new technology – all under the cover of reclusive billionaire Howard Hughes’ seabed-mining venture.

However, the ship couldn’t lift the submarine alone. A submersible mining barge equipped with a massive claw positioned beneath the ship would serve as an underwater platform to lift and then as a hanger to hide the recovered submarine.

The vessel’s crew faced hazards that would sober even the bravest. First, the nuclear warheads, exposed to immense water pressure, might be unstable and could possibly explode during retrieval. Perhaps even more dangerous, the salvage crew would be alone on a vast ocean.

And, finally, there was the weather. If a storm hit while lifting K-129, the pipe string could snap, tearing the ship in half.

By June 1974, after extensive preparations, the Hughes Glomar Explorer and the submersible barge were ready. By now Howard Hughes was a madman in failing health, and President Richard Nixon had resigned in disgrace. The Cold War raged on.

The Hughes Glomar Explorer moved into position over the wreck in July. But President Ford didn’t grant permission to begin the operation until August 11. Working under immense time pressure because of a rapidly closing weather window, “Project Jennifer” was carried out over the next month. Soviet spy ships arrived and began circling – and watching. If the Soviets discovered the ship’s true mission, the Hughes Glomar Explorer could be sunk.

The massive claw with its hydraulic fingers grappled the sub, and lifting began. Slowly the submarine was hoisted from the seabed. When the ship was carrying the full weight of the sub, 2,500 tons, she sat seven feet lower in the water. The operation continued until the wreck was some 5,000 feet from the surface. Then disaster struck.

Part of the claw broke off and the wreck began to disintegrate. A nuclear missile slipped from its launch tube and tumbled back to the seabed. There was no detonation. A nervous crew continued lifting. The remaining section of the sub was small enough to fit into the ship’s “moon pool,” a huge opening in the center of the ship, where it was dissected and analyzed.

The world remained in the dark about the ship’s true mission, which the CIA codenamed “Project Jennifer.” However, that changed when four burglars broke into Hughes’ office and stole thousands of dollars in cash and files about the project, scattering papers as they fled. Assuming the files contained business documents, the thieves demanded a million dollars for their return. The FBI and the Los Angeles police were brought in.

Most of the documents were ultimately recovered but, despite tight secrecy, details leaked to the media. In February 1975, Jack Anderson’s column in the Los Angeles Times broke the story of Project Jennifer to the world. The ship’s cover was blown and plans to return that summer to recover the remainder of the wreck were abandoned.

Exactly what the US Navy recovered remains a debate even today. Some say that the entire submarine was raised and that the claw-breaking story was further “cover.” Officially, only the forward 38 feet of the submarine was salvaged, and with it a pair of nuclear-tipped torpedoes, several encoding devices, various codebooks and the bodies of six sailors, which were given a solemn Soviet burial at sea. In 1993, then-CIA director Robert Gates gave a videotape of the burial to Boris Yeltsin, the former Soviet leader, as a confirmation that the Cold War was over.

So what became of the Hughes Glomar Explorer? 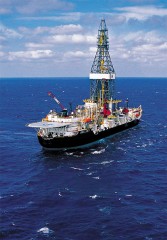 She was transferred to the Navy in 1976 where she stayed essentially mothballed for the next 20 years. Global Marine, one of the largest offshore drilling contractors in the world, came up with a better idea. In 1996, the company signed a 30-year contract with the Navy to lease the vessel and totally recondition and convert her into a one-of-a-kind deep-sea drillship.

This article originally appeared in Beyond magazine, Fall 2001.