He Changed the Way We Live 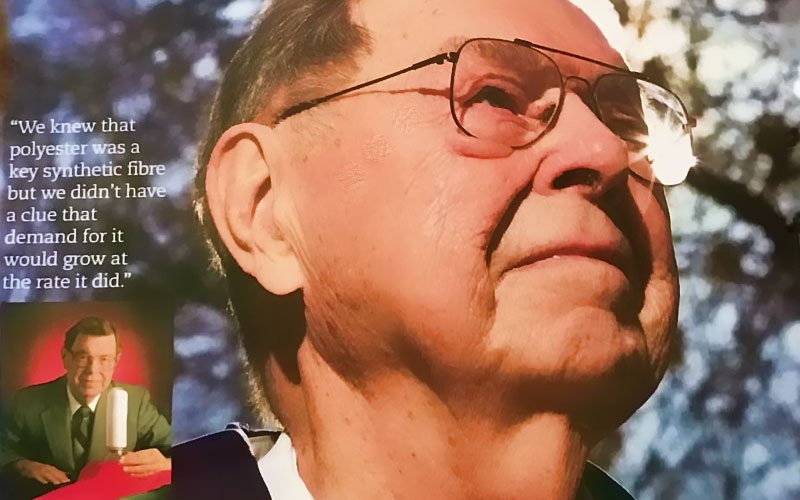 Even if you’ve never heard of Del Meyer, you’ve been touched by his work. He has been awarded 26 patents during his 35-year career. None, however, has had more impact than his idea to make purified terephthalic acid, or PTA, the raw material of polyester – a product that forever changed the world.

Del Meyer came from a small country town in Iowa, the kind of rural environment that typically cultivates farmers rather than scientists. He grew up without electricity or running water and spent his first eight years of formal education in a one-room schoolhouse. Such humble roots, however, didn’t dampen his scientific curiosity.

When Meyer joined Amoco in 1953, the company was testing a new technology developed by a firm called Scientific Design that would convert paraxylene – a raw material Amoco could produce in great quantities from its extensive refining operations – to terephthalic acid (TA), the feedstock for polyester. Believing there eventually would be a huge market for synthetic fibers, Amoco acquired worldwide rights to the process in 1957.

But high-purity polyester demands high-purity ingredients, and any impurities in the raw material can spoil the overall quality of the final product. In the late 1950s, the preferred polyester feedstock was dimethyl terephthalate, or DMT, a derivative of terephthalic acid. Amoco and other manufacturers used an expensive process to make a highly purified DMT. Because the process purified TA to make DMT, no one considered the more complex question of producing a purified TA.

No one, that is, except Meyer. It occurred to him that purifying TA to make DMT was an awkward way to produce polyester raw materials. Not only did it create an extra step, but the byproduct recovered from the process still had to be purified and recycled.

Was there a more efficient way? Meyer thought so. “I suspected that it might be possible to purify Amoco’s TA directly, thereby simplifying the process and eliminating steps,” Meyer says. Thus, the idea for PTA was born.

Nate Fragan, who at that time was in charge of Standard Oil’s chemical research laboratories in Whiting, Ind., directed his research people to begin looking for new ways to produce traditional feedstocks for the emerging polyester market. Fragen’s group set a target of 99.97 percent absolute purity to match the purity of DMT.

The first breakthrough came in 1957 when Amoco researchers Al Hensley and Phil Towle developed a salt process that produced a high-quality TA. “We gave samples of the purified product to our polyester customers but the response was less than encouraging,” Meyer says. “The product proved difficult to work with and did not meet our customers’ demands. Also, the economic incentives weren’t there.”

Not much happened until the basic patents on polyester began to expire in 1961. Suddenly, more and more manufacturers began expressing an interest in getting into the growing polyester market. The industry desperately needed economical purified feedstocks.

A High-Quality, But Economical Process

Phil Towle assigned three of his people – George Olsen, Carl Serres and Meyer – to look for an economical process that met Amoco’s high-quality requirements. “For economic reasons, we limited our investigation to water and acetic acid as a solvent,” Meyer says. “We divided our approaches – with Carl on oxidation and hydrogenation, George and me on the rest.”

Meyer says the group first investigated what it already knew worked, rather than looking at new approaches. Meyer tried scores of ways to make the salt process work, but could not find a practical solution.

Finally, out of desperation, Meyer opted to try hydrogen treatment. It was now January 1963. “Because this was Carl’s area, I asked him if he objected if I conducted some experiments,” Meyer says. “Carl felt the answer was in the oxidation process, so told me to go ahead but with a warning that hydrogen wouldn’t work.”

Meyer first tried using a nickel catalyst. He and his technician, John Banas, assembled an 80-pound rocking autoclave (heating container) and ran the experiment. The next morning, after the unit had cooled down, Meyer and Banas opened the autoclave and were disappointed to see aqua-colored solids. “The nickel had dissolved and precipitated on the TA as it crystallized,” Meyer says. “We isolated the product, analyzed it for impurities and color, and realized we were on the right track. But we needed a catalyst that would resist corrosion at high temperature.”

‘The Whitest-Looking TA We Had Ever Seen’

Encouraged that hydrogenation had the potential to do the job, Meyer reran the experiment using the noble metal palladium as a catalyst. “This time when we opened the autoclave, John and I saw large crystals of the whitest-looking TA we had ever seen,” he says.

Meyer had produced the first PTA.

It would be an understatement to say that events happened quickly after just a few experiments. With the breakthrough of a lifetime in hand, Amoco couldn’t afford to wait. “Our customers were anxious to take advantage of a growing market and really put the heat on us to go,” Meyer says.

But Can We Sell It?

Two months after Meyer’s first successful experiment, Phil Towle decided to go with this newly discovered technology and put together a team to design Amoco’s commercial process. With no pilot plant, no process studies and only a few experiments, the new plant proposal was presented to the Standard Oil board. Chairman John Swearingen asked one key question: Can we sell the product?

The answer reportedly coming from Jack Lambertson, vice president of marketing, was, “If manufacturing can make it, we will sell it.”

That was all Swearingen needed to hear. The board approved the project, and a 40-million-pound-per- year PTA unit at Joliet, Ill., went into the engineering and construction phase. Even before the Joliet unit was completed, Standard’s board gave the nod for two more units at Decatur, Ala., adding another 200 million pounds of capacity per year. In 1978, the world’s largest single-train PTA plant came on stream on the Cooper River near Charleston, S.C.

“We knew that polyester was as close to being universally acceptable for fiber as any synthetic,” Meyer says. “But we didn’t have a clue that the market would grow at the rate it did. During the ‘60s and early ‘70s it grew 35 percent a year. That’s phenomenal. Just when we thought the growth rate would slow, someone would find a new use for it, such as polyester bottles, and the growth rate took off again.”

And Grow It Did

Today, the end products made from Amoco’s PTA – polyester fabrics, recording tapes, tire cord, food packaging and soft-drink bottles – touch every corner of the world. During the ‘60s and ‘70s, North America and Europe made up most of the polyester market. By the end of the ‘80s, China, Africa, Latin America and the Middle East constituted 43 percent of the total demand. And the share for those parts of the world is still growing – as is the total demand.

Even with this success, Meyer says he would have taken a more venturesome approach in his early experiments if he could do it over again. “If anything, we didn’t take enough risks in the beginning,” he says. “Hydrogenation really was our 23rd approach. When I look back, I wonder why the heck I spent more than a year looking at the salt process and other things instead of taking a more adventuresome approach earlier. If we had discovered the PTA process in mid-1961, we would have had a lot more time to do extensive studies. We had set the right requirements, but we didn’t venture out far enough to look at all the ways to meet them.”

Meyer’s process has been refined over the years to keep up with newer catalyst developments and other improvements. But more than 40 years after his initial work, PTA technology still follows Meyer’s basic process of making a high-value product from crude oil refining.